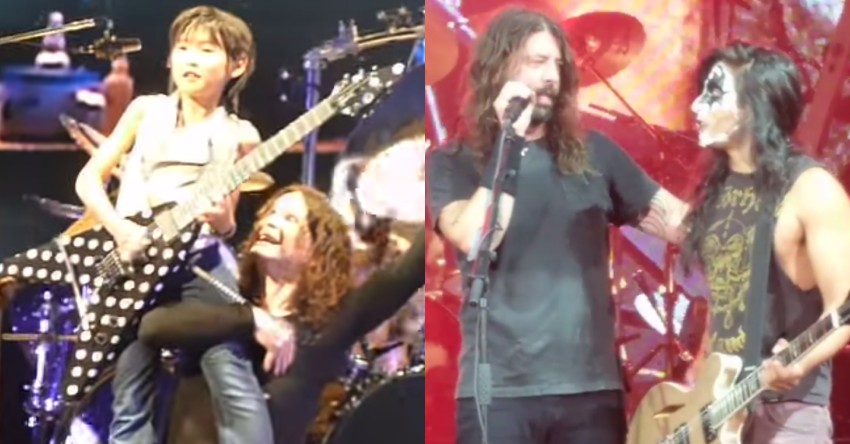 Ozzy Osbourne, Foo Fighters, Blink-182 and many more have all given viewers the chance of a lifetime.

Performing in front of a full house is the goal of every musician, but jamming on stage with their idols is the kind of wild fantasy that most superfans only dream of.

Fortunately, many of the world’s greatest rockers are happy to return the love they receive from thousands of adoring fans by giving talented audience members the chance to shred riffs, sing melodies and rock the music. group at concerts.

From metal legends like Ozzy Osbourne and Pantera to current chart tops like Foo Fighters and The Killers, here are 12 rock bands that got fans to help them sing songs.

Yuto Miyazawa made headlines when he picked up this heavy metal classic on The Ellen DeGeneres Show before performing it perfectly in front of thousands of people at Ozzfest a year later.

Dave Grohl wisely picked the guy wearing Gene Simmons ‘KISS mask to star on Seattle Rockers’ base radio. After the jam, the frontman even said that aspiring guitarist Yayo Sanchez was the best fan the Foo Fighters have ever played with.

Steel Panther’s glam rock revivalists didn’t hesitate to give the Aussie fan who challenged their drummer to a duel all kinds of shit as he took the stage, but they backed down after tearing up the opening groove of this. Van Halen’s killer piece.

4. Sean Kinney lets a persistent fan play “Would” with Alice in Chains

After display a t-shirt Signed up with a call to play for the whole show, bassist Mike Inez finally said “Get up here, motherfucker” and let the dude replace Sean Kinney on one of the most endearing songs from grunge legends.

5. A student on drums on “Under Pressure” with Foo Fighters

OK, we’ve seen a performance from Foo fighters and fans before. But this cover of Queen’s “Under Pressure” with second student Pierce Edge was too impressive to overlook.

Pantera frontman Phil Anselmo clearly influenced young Dusty’s vocal style. The groove metal pioneers were even polite enough to let the guy warm up before the late and great Dimebag Darrel tested his skills by matching him to the pitches of his screaming guitar overtones.

7. Metallica’s bassist’s son picks up “Blind” and “Twist” with Korn

He’s not just a fan: the 12-year-old prodigy is the son of Metallica bassist Robert Trujilo. Tye’s undeniable talent earned him a stand-in spot on the nu-metal band’s South American tour in the absence of Reginald “Fieldy” Arizu.

8. Fan drinks beer and kills “Jesus from the suburbs” with Green Day

This dude kicked off his performance on stage for this long american idiot single by killing a brew in front of a delirious crowd. There isn’t much more to punk rock than that.

Travis Barker’s machine gun fills require more than an amateur execution ability, but this young percussionist made it look easy.

Based on his Under Armor t-shirt, buzz cut, and geeky glasses, you’d never guess that “Steve from Philly” could play a mosh pit-worthy rendition. avenged fan favorite.

11. Street musician sings “I don’t want to miss a thing” with Steven Tyler

12. The drummer saves Groove on “For Unknown Reasons” with The Killers

The first guy who volunteered to play this Sam’s town single did not play two bars before being kicked out of the kit. Fortunately, Jose Luis was there to bring the pace back to the front 65,000 fans.

2018-05-09
Previous Post: southern ambassadors of classic rock; One of the first Southern rock bands of the 70s, The Marshall Tucker Band performs one night only at the Liberty | Vision
Next Post: The Bat Fangs cut through the monotony of modern rock