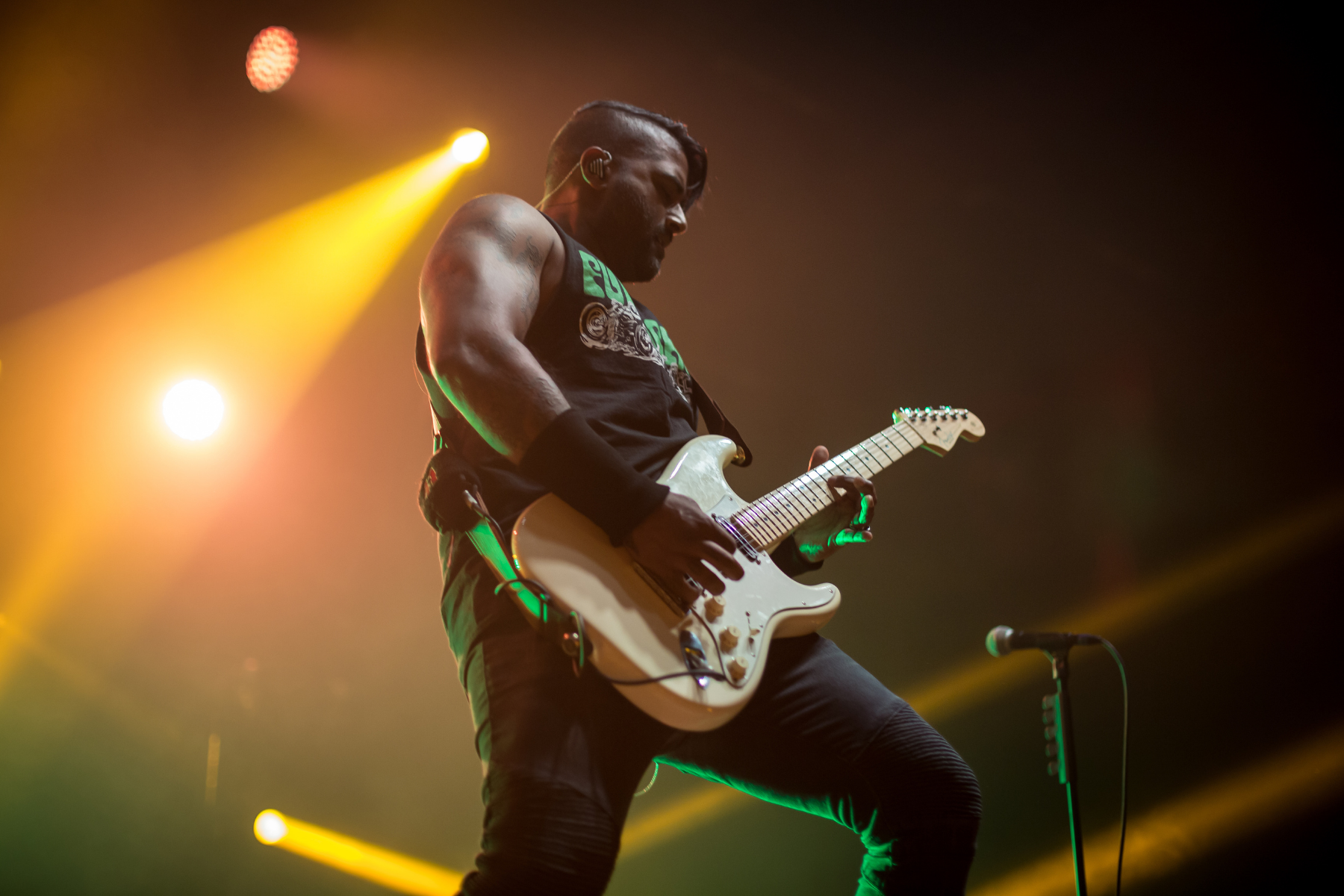 Dave Bash was one of the first North American musical performances for late South Asians ‘90s. He is best known as the lead guitarist of the Canadian rock band Sum 41. His musical influences were heavily influenced by bands like Genesis, Foreigner, Led Zeppelin, Rage Against The Machine, the early Iron Maidens and more.

Baksh started his musical journey playing in bands like Embodiment, 747 and others before joining Sum 41. The early years of his musical journey were grueling. The band often got spat on during their live performances, called racial slurs and even splashed with water. His realistic expectation of a career at the time was fixing guitars for a living. He then joined his high school friend Deryck Whibley in the group Sum 41 from middle to end ‘90s. Fun Fact: Deryck and Dave met on their first day of high school and were kicked out of class for talking too much about music.

The song “Still Waiting” was the first song I ever heard from the band Sum 41. Something about hearing the opening riff for the first time as a teenager with the lyrics calling out to me: “So I’m still waiting, For this world to stop hating? While rummaging through their YouTube live recordings, I found Dave Baksh to be South Asian.

Seeing someone of South Asian descent shred guitar solos on stage for a living lit a fire inside. It made me want to play music even more. I was lucky to have a college music teacher at the time named Mr D who encouraged my passions. He introduced me to Guns and Roses, Ozzy Osbourne, Cream, Metallica, Paramore, The Killers and My Chemical Romance. Find out a little mixed I created some of my favorite tracks.

Baksh had a 9 year break with the band Sum 41 from the years 2006 to 2015. He explored with a few different bands such as Organ Thieves, black cat attack and the Brown Brigade. The ultimate reason for the hiatus was that record companies wanted to push a certain sound and direction. Baksh wanted to play more metal than punk rock at that time.

Brown Brigade first started as a side project with Baksh’s cousin, Vaughn Lal. It became a full band with more members during its hiatus. What made Brown Brigade so special was that Baksh got to play in a band that merged some of his biggest influences growing up. These encompassed soca, calypso, funk, reggae, heavy metal and more. He even showed off his lead vocal abilities on the tracks produced by the group.

Baksh’s journey is so captivating because he started in the music industry before social media. He grew up in a time when a band was forming, playing around town, and building an audience through local clientele. A record company would come in, sign a deal, make a record, and it would be left to the masses.

On the other hand, social media allows various content creators to reach audiences with a Do-It-Yourself approach. This allows for greater creative freedom, as anyone from anywhere in the world can create content. Baksh has seen it all enduring the waves of the music industry. From declining CD sales, to the heyday of Napster, to music downloading, the rise of music videos, and the current generation of streaming music.

Baksh’s music will always have a special place in my heart. It was the first time I had seen a musical performance. I loved learning that the first guitar riff Baksh ever learned was from the song “Caught In A Mosh” by thrash metal band Anthrax. He used tabs and mostly learned music by ear afterwards. Another fun part of Sum 41 that I learned during my research journey was the meaning of its nickname “Brown Sound”. The words “Brown Sound” referred to Eddie Van Halen’s legendary rich, pitch-perfect guitar sound using specific Marshall amplifiers.

I’m glad Dave Baksh chose to play guitar over rugby in his youth. By studying the greats through his uncles and cousins ​​and practicing guitar in basements, he became an iconic guitarist.

Photo by ChrisJamesRyanPhotography via Shutterstock.com

Arun fell in love with music at a young age thanks to his middle school music teacher, MD Whether it’s creating YouTube covers or writing about musicians, Arun believes music is a magical force. without any borders. Its goal is to create soul ties with artists around the world and provide insight into their creative minds through lively discussions. To follow Arun’s other writings, visit his blog: https://musicwithoutanyboundaries.wordpress.com/ and to follow his music tour: https://www.youtube.com/channel/UCRr6yMRDCk9m9isRvEgan_A