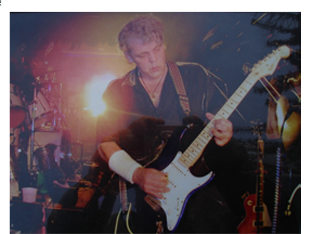 Bringing the rock soundscape to life by covering hits from the 1960s to the present day, ALMOST HOWE is an experienced force that never ceases to stun

Emigsville, Pennsylvania – Bringing with him years of musical experience, ALMOST HOWE represents one man’s dream come true. Few artists are capable of independently leading a band with their multiple talents and gifts, but Billy Jones is one of those phenomena.

With a rich discography that includes various CDs and covers, ALMOST HOWE presents a solo band with a complete sound. Created by playing and recording all of the instrumental and vocal accompaniments himself, Billy Jones’ project brings classics of the past and present to life.

Covering rock hits from the 60s to the present day, ALMOST HOWE is the culmination of Billy Jones’ 58 years of experience on stage. With work in full swing on the band’s CD #5 “Soundscapes”, the artist hopes to create a significant impact with his imprint.

ALMOST HOWE channels a tremendous range of Rock styles and elements. The single “DECEIVED” features a rock ‘n roll version that uses a fast tempo ballad and a slow blues track. Meanwhile, “NO ALIBIS” features a collection of sentimental and thought-provoking ballads, and the track “TRAIL OF TEARS” underscores a powerful collection of progressive rock with political overtones. “THE OTHER SIDE” is dedicated to his three best musician friends who died way too soon. It contains soul ballads and intensive progressive rock songs.

ALMOST HOWE’s first three CDs are currently available on over 95 digital distribution sites worldwide, including ‘CD Baby’ and ‘Amazon’. His live shows include full backing vocals, instrumentation, and videos for all the covers and originals Jones has performed and recorded.

“Each song has a video I produced that includes live clips and images. My music comes straight from the heart but has never had the financial backing to be heard by industry professionals and the general public. “says the artist about his music.

The artist’s four albums were mastered by renowned engineer and producer, Gene Paul – winner of 9 Grammy’s, including a Grammy for Roberta Flack’s “Killing Me Softly”.

Visit the ALMOST HOWE website to discover/download/buy new music and follow the artist on social media for updates on new releases. For interviews, reviews and / or collaborations, do not hesitate to contact us by e-mail.

Almost Howe is a name that showcases the vibrancy and musical brilliance of the composer, artist, digital recorder and pre-master of all original CDs – Billy Jones. The artist is currently working on his 5th CD which will be entitled “SOUNDSCAPES”.

Jones performed his first “Battle of the Bands” at age 12 and received formal vocal training. He has performed in 8 US states, Corfu and Athens – Greece, Singapore, Hong Kong and the suspension deck and flight deck of the USS Saratoga CV-60 on the return cruise from Vietnam. One of the first artist groups opened for Albert King in Pueblo, Colorado. His last band, “ICU”, played extensively in every state for over 16 years and opened for “Skid Row” in Pottsville, PA.