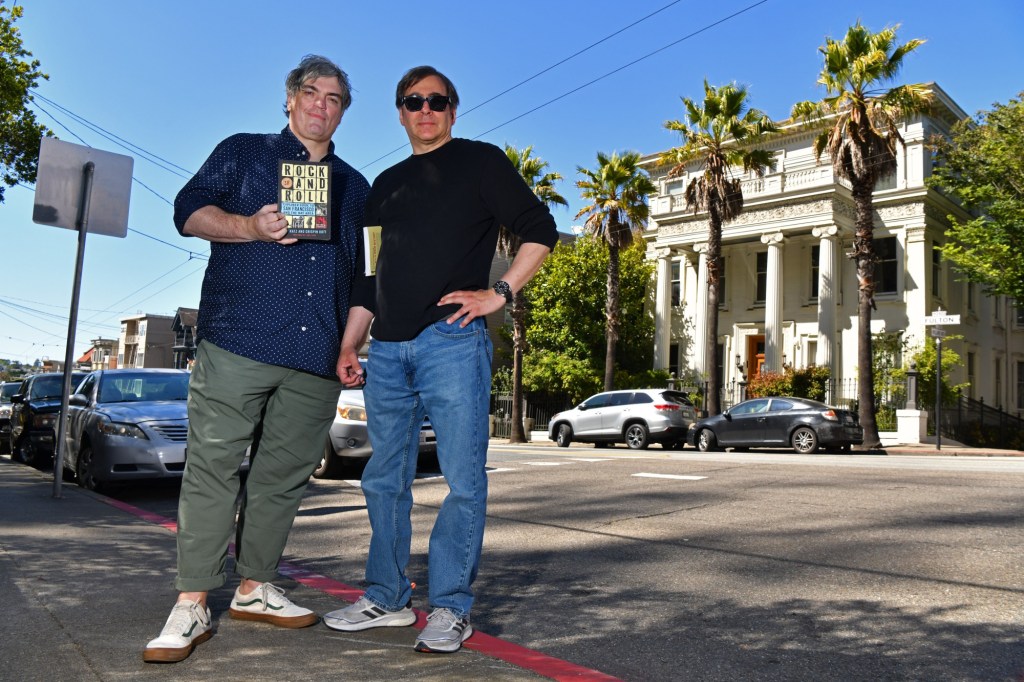 Mike Katz and Crispin Kott want to take you on a journey through the history of Bay Area music.

If you’re into a game, all you have to do is pick up a copy of the “Rock and Roll Explorer Guide to San Francisco and the Bay Area,” their cool new book detailing where Jerry Garcia, Grace Slick, Tupac Shakur and other music stars lived, walked and worked in the area. It also covers a number of notable non-locals, from Bob Dylan to Sid Vicious, who have spent time in the area. The volume follows “Rock and Roll Explorer Guide to New York City”.

We recently had the opportunity to chat with the two authors, both of whom have moved to Northern California from the East Coast – and to walk through 10 iconic music destinations in the Bay Area. Katz now calls Monterey home, while Kott lives in Oakland.

Question: How did the idea for the Explorer books come about?

Mike Katz (MK): I have always been fascinated by the history of cities, especially what makes them culturally unique. I also spent several years training in New Orleans, where you can visit the places where jazz emerged as a uniquely American form of creative expression. Standing in these places and touching these buildings had a profound effect. It’s a powerful experience, much like visiting the place where the Declaration of Independence was signed or where Lee went to Grant.

Many years later in New York City, Crispin and I attended a panel discussion with the surviving members of the Velvet Underground and listened to Lou Reed recount the many unexpected places he and the others met, worked, and essentially each other. recreated. We had talked about writing a book on New York rock ‘n’ roll history, but it was a “eureka” moment.

Question: Why did you decide to do the next book on the Bay Area?

Crispin Kott (CK): After New York, we knew we wanted to either tackle the Bay Area or Los Angeles. We went with the Bay Area in part because there was so much more to the story than what happened in the second half of the 60s. It’s all there too, but the Haight-Ashbury scene doesn’t wasn’t the beginning of rock music in the Bay Area, and it wasn’t the end either.

Question: Many people are familiar with the rock monuments in SF – Fillmore, Haight-Ashbury, etc. But what is the history of rock outside of the 415?

MK: A lot ! Oakland’s blues and R&B roots go back almost a century, and Berkeley has an extremely diverse history spanning folk, blues, rock, and R&B, as well as a few pioneering record labels. San Jose, Santa Clara, Stanford, Menlo Park, Palo Alto, and various other sites along the peninsula were both critical testing grounds and important performance venues for many important artists of the 1960s and beyond. .

Question: The largest city in the Bay Area is, of course, San José. Is there a lot of rock history to be discovered in the land that gave us the Doobie Brothers?

MK: Yes indeed. The house Tom Johnston lived in when he founded the Doobies has recently been given historic status. Beyond that, San Jose can also boast of the Grateful Dead’s first concert under this name, during one of Ken Kesey’s Acid Tests on December 4, 1965. This event was reportedly attended by the Rolling Stones Keith Richards and Brian Jones after their own concert at the Civic Auditorium.

Kantner was a student in San Jose State and worked with Kaukonen at Benner’s, a local music store. Jorma even made money there teaching guitar lessons for a while. There are plenty more, but I can’t give it my all here.

Question: What were the biggest surprises that came while writing this book?

CK: I was constantly amazed at how often isolated places appeared in seemingly disparate scenes, or how they were touched by important music and non-musical history. (For example) 330 Grove Street in San Francisco was in 1978 both where the LGBTQ Rainbow Flag premiered and the site of a punk show starring Dead Kennedys and The Avengers. And several years earlier, it was the headquarters of People’s Press, a crucial underground printing press. Unfortunately, the place where this building once stood is now part of a parking garage. But it’s still fascinating to think of what was there.

Question: The title of the book says “Rock and Roll”, but there’s actually a lot more than that genre represented in this book, isn’t there?

MK: We make a conscious effort not to create unnecessary boundaries between perceived musical genres. Musicians usually don’t, and these names are often marketing tools anyway. By following our rule of “inclusion is better than exclusion”, for example, we describe blues and R&B in the Bay Area before the so-called rock ‘n’ roll era (circa 1955 and beyond) , because excluding these artists would deprive them of their place in history as progenitors for so much that followed and be a gross distortion of history. At that time, blues, rhythm & blues, and rock’n’roll were often seen as variations of the same thing but for different audiences. The ‘classic rock’ sound of the 60s is different from the punk sound of the following years, but they are part of the same musical continuum and we cover them both with enthusiasm. We don’t cover hip-hop much, but we write about Tupac Shakur because he is such an imposing figure who has influenced musicians and fans across all demographics. We even have Johnny Mathis in there because he’s one of the most popular singers of all time and he’s a staple. He even went to the same high school as Marty Balin.

Question: Crispin, what is your favorite piece of rock history that you learned while doing this book?

CK: Neal Schon has confirmed a hilarious story about an incident with a fire extinguisher when Journey was recording “Infinity” at His Master’s Wheels in San Francisco. And the Brian Jonestown Massacre’s Joel Gion story about being hired to work at the Mitchell Brothers’ O’Farrell Theater is also great.

Question: Same question for you, Mike.

MK: One dramatically unpleasant revelation that I have learned is that a direct line can be drawn between the forcible internment of Japanese Americans at the start of World War II and the rise of the Fillmore Auditorium as favorite spot for 60s San Francisco sound..

Black Americans who repopulated the neighborhood – one of the few places to hire them – turned it into an entertainment destination, and impresario Charles Sullivan made the Fillmore his biggest and best place in the early 1950s. When “urban renewal” set in some time later, and many black residents in the area were forced to move elsewhere, the audience declined until Sullivan began to share the space with one. young Bill Graham. Sullivan died in tragic circumstances soon after, and the transformation was complete.

Question: I’d love to get to know each of your favorite Bay Area bands. Give your, say, top 5. And bonus points if you put them in order.

MK: Not in just any order, because it would change regularly: Creedence Clearwater Revival, Sly and the Family Stone, Jefferson Airplane, Etta James, Santana.

CK: In order: Grateful Dead, The Massacre of Brian Jonestown, Sly and the Family Stone, Green Day, Dead Kennedys. It is as of now and is subject to change, depending on a variety of factors. Jefferson Airplane and Cool Ghouls are boiling just under the top five.

2021-11-16
Previous Post: 10 times rock bands have destroyed their instruments, their environment, each other
Next Post: 10 Cool Classic Rock / Soul Songs