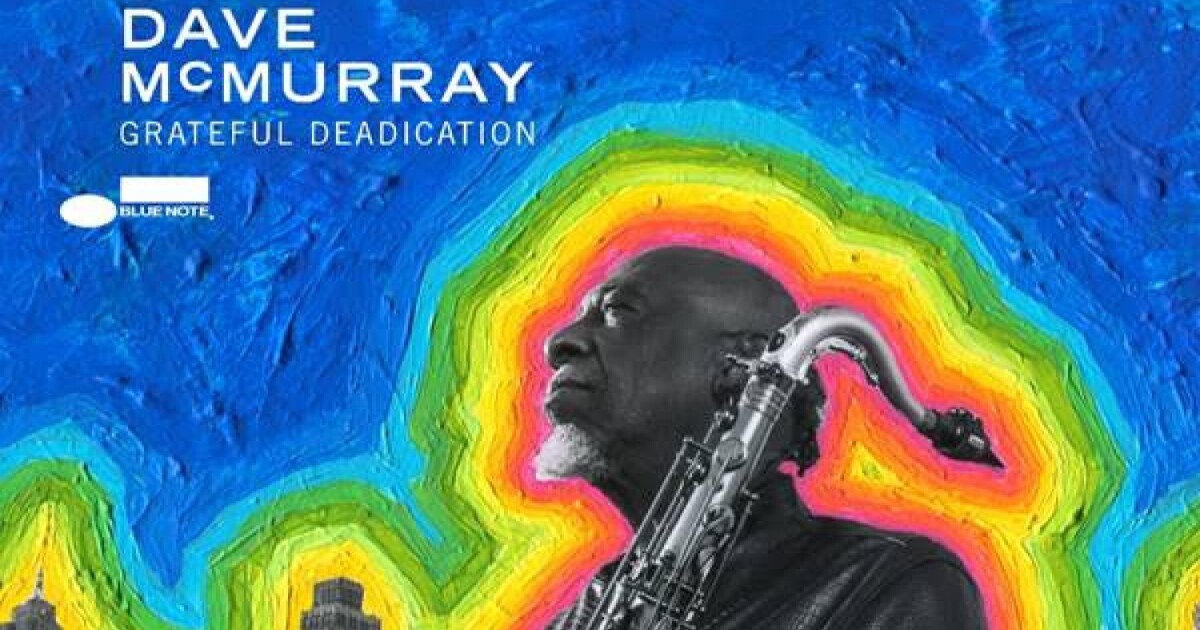 Considering that the music of the classic rock era dates back about 50 years, today it falls under the “oldies” category. As jazz musicians have always found their inspiration in the musical past, perhaps the music of Led Zeppelin, Jimi Hendrix, The Grateful Dead and Bob Marley are the new “standards” ripe for the exploration of improvisation.

The music of the Grateful Dead can be polarizing, drawing intense devotion as well as unimpressive rejection from music lovers of all walks of life. Either you like the dead or you don’t really understand. With his Grateful dedication, Dave McMurray has an album for Deadheads and jazz fans that sounds brand new.

Detroit-born multi-instrumentalist McMurray first toured with blues legend Albert King’s band in the early 1970s, then joined genre group Was (Not Was) when they formed in 1979. The frontman of this group, Don Was, is now the president of Blue Note Records. Murray’s new album is his second for the label, and it’s another connection with Mr Was as well.

McMurray says his “Grateful Dead Adventure” began when he first performed with the Wolf Brothers, a recent musical project by Grateful Dead guitarist Bob Weir who now includes Don Was on bass.

The opening of the songs reminded McMurray of the solo playgrounds created by Miles Davis. “The more I listened,” he told Jazz.fm, “the more I knew these songs would eventually become a vehicle for my jazz expression.”

The blues, soul and rather relaxed atmosphere of the music of the Grateful Dead find their take off in the arrangements of McMurray. The jazz sensibility is there, but the album may sound closer to the source to most jazz fans.

The album’s first single, “Loser,” is a folk-blues tune given new life by legendary blues singer Bettye Lavette. Guitarist Wayne Gerard finds himself here on a par with conductor McMurray, as both offer a deep and fiery blues feeling.

The fast, pulsating tempo of “The Eleven” finds McMurray’s band in total control of the delicate time signature, brimming with tropical clave beats before heading into a truly heart-breaking bridge section.

Relaxed grooves with modern edges, marked by double rhythm guitars and both synth and piano backing, “Fire on the Mountain” showcases the melody of the original and McMurray’s saxophone solo.

This album opener and other songs, like “Estimated Prophet” employ Maurice O’Neal’s adventurous electric keyboard keys that cleverly connect the modernist styles of the 70s and today. Jazz fans and the Grateful Dead have always had a lot in common, Grateful dedication gives both of them a lot to love.

One of the first architects of heavy metal, Led Zeppelin drew a lot of inspiration from American blues artists. Some of their most beloved songs were covers of classics by Willie Dixon, Howlin ‘Wolf and Memphis Minnie. A jazz tribute to Led Zeppelin therefore seems natural. Whole Lotta Love: The Music of Led Zeppelin finds the blues core of the source material and successfully brings a jazz sensibility to it.

The memorable descending bassline of “Dazed and Confused” sets the stage for the first half of the Franceschini / Hays / LeFleming / Calvaire recording, then focuses on the stammering bass and drums of the song’s coda. The sax and piano solos are worthy of a stadium-sized audience, grand and powerful.

The ebb and flow changes of “Kashmir” find Franceschini on soprano saxophone, blowing a passionate solo that evokes the rising voice of Robert Plant. Piano, bass, and drums find a common cause in melodies, but otherwise avoid copying Led Zeppelin’s guitar, bass, and drums icons.

Still the favorite of guitar lovers, “Stairway to Heaven” is not included in this tribute. However, Zeppelin fans will appreciate the inclusion of lesser-known songs “For Your Life” and “Custard Pie”. The group creates moving centers for both songs and might have jazz fans curious to revisit the rock originals.

Hays’ piano work is the heart of jazz All full of lovewhether it’s adding a powerful swing or finding the right tone for the dark chords of that classic hard rock. LeFleming’s double bass strikes the right balance between honoring the intention of the songwriters and playing true to its modern traditionalism. Calvary’s drums don’t live up to the punchy John Bonham, but meet the needs of the songs and give all of that Zeppelin tunes more color and swing than the rock band has ever attempted.

All full of love ends with a slow-burning version of “No Quarter”, with a sloping bass and deep tenor tones that will leave no doubt that this is still a jazz band, through and through .

Singer Elasea Douglas and bassist Sadiki Pierre are Acute Inflections. The title of their new Bob Marley tribute album, 400, refers to the four centuries that have passed since the first Africans were enslaved in the Americas. It’s also one of Marley’s lesser-known songs that they rework among 16 tunes – plus three interludes – on 400.

Acute Inflections focuses on Bob Marley’s strident political compositions, cheerful melodies and literal “freedom songs”. 400 reminds the listener of the incredible legacy of Marley’s musical production. Hits like “I Shot the Sheriff”, “Stir It Up”, “Jammin ‘”, “Waiting In Vain” are all reminders of his genius. More obscure tracks also prove it, Bob Marley was an international superstar whose music continues to inspire us today.

Melodious and moving recordings of deep tracks like “All Day All Night” and “High Tide or Low Tide” (by the way, the two bonus tracks on the release of Marley’s 2001 CD Take a fire) will allow reggae newbies to dig deeper into Marley’s songbook. Reggae and jazz fans may be moved to find out more about Acute Inflections.

The duo’s talent for filling a song with just voice and acoustic bass, which they have refined over four albums in as many years, shines brightly on these beautiful songs which have become so many musical touchstones since their original recordings. from the 1970s. Memorable music by an innovative young duo, 400 is a captivating celebration of Bob Marley.

Organist Jeff Jenkins joins guitarist Mike Abbott and drummer Mike Marlier as 2B3, working to extend the organ trio’s tradition to their other musical passions of funk, pop music and classical rock.

Their tribute to the greatest rock guitarist in history, Jimi Hendrix, Jimi leans strongly towards hard rock. Heavy is right. Abbott’s guitar went up to 11, and these three veterans really go wild on this collection of ultra-heavy grooves.

Twenty years of frequent collaborations have strengthened this organ trio, which serves 2B3 well as they reimagine these songs with complex time signatures and sudden changes in direction and tempo.

The three musicians are also jazz educators in Colorado and developed this tribute project after exploring the jazz arrangements of Prince’s songs. Prince’s unique pop progression – a stylistic successor to Hendrix’s soul side – to this classic rock catalog was natural.

Thick distortion effects color Abbott’s guitar as the album opens with “Purple Haze”; Jenkins gets a gritty sound from his organ and Marlier fuses his jazz chops with the liveliness of progressive rock.

The beautiful ballad “Little Wing” has a lighter touch, taking inspiration from delicious Abbott chordwork and Jenkins’ gospel-tinged organ solo that feels like a trip to church. The church in heaven, maybe?

More abstract rearrangements of “Fire” and “Foxey Lady” use the well-known melodies as stepping stones to conduct improvisation flights. Here’s where the comparisons could be detrimental. No one can emulate the Hendrix style of guitar without sounding like a cheap knockoff. Abbott remains in his own musical personality, which might leave rock fans rushing to their Hendrix records.

The closest for the 2B3 Jimi homage is an original tune. “Jimi” gives drummer Marlier the chance to decorate the intro with a relaxed solo, then Abbott and Jenkins gradually build the song into a mountain of sonorous colors. It’s an epic, psychedelic portrayal of a musician who deserves the pedestal his fans have placed him on.