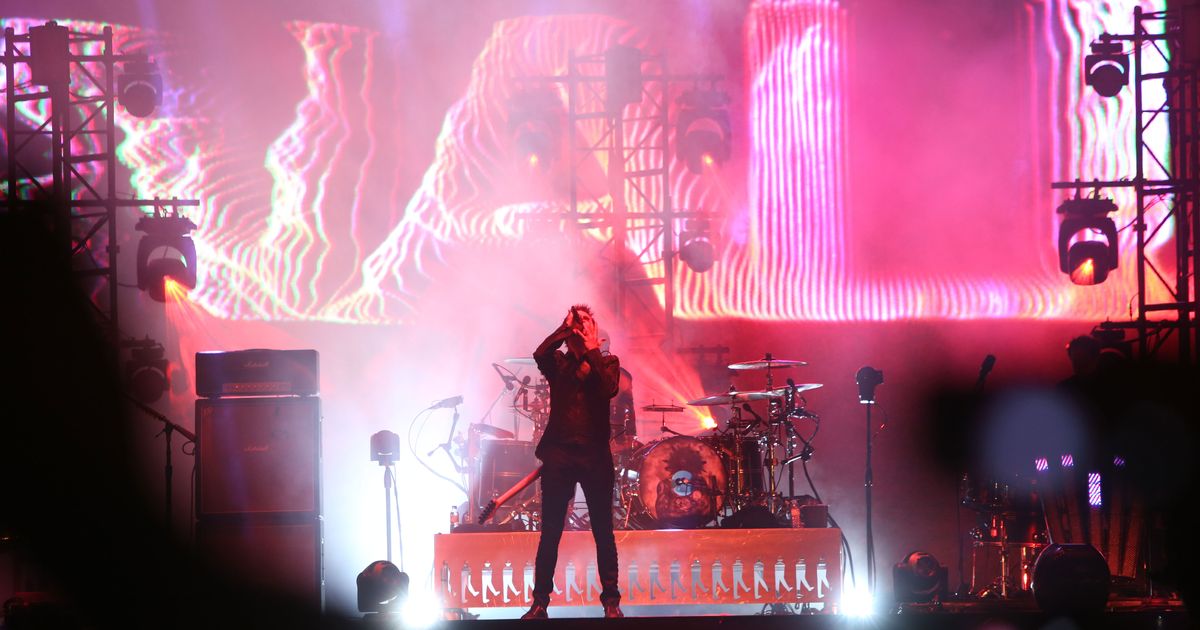 “Headphones connect to iPhone / iPhone connected to Internet / Connected to Google / Connected to government,” MIA raps on “The Message”, the introductory track of his 2010 LP Λ O Λ (pronounced “Maya”). At the time, the provocative lyrics sounded ridiculous, carrying all the presumed legitimacy of a high Jon Stewart getting paranoid about the intricacies of a dollar bill. The sentiment was widely slandered; in what stood then as his first negative review of the album Pitchfork, contributor Matthew Perpetua called “The Message” in particular “a simplistic, paranoid rap that is as rhetorically effective as someone in a dorm room ranting about the CIA who invented AIDS.”

Corn MIA was right. Suddenly, his seemingly cheesy feelings about government surveillance and declining privacy were incredibly prescient. At worst, MIA was guilty of bringing up a socio-political moment years before it paid off – which is exactly the same position the rock band Muse finds itself in right now. Over the past decade – in particular, during the eight years that Barack Obama served as President of the United States of America – British prog-rock heavyweights have functioned as a modern rock version of QAnon, with lyrics that delve deep into anti-authoritarian sentiments and dystopian diatribes.

Right-wing and sometimes fanatic conspiracy theory commentator Glenn Beck notoriously counted as a fan, and even if his policy and that of its leader Matt Bellamy do not correspond perfectly (the latter described himself in The Guardian in 2012 like a “leftist libertarian” who is “slightly paranoid”, and once considered himself a 9/11 verist), the mixed message embedded in Muse’s catalog is at times uncomfortably similar to the radical fringe beliefs that currently dominate American politics. Laugh all you obviously want to the album cover adorning the 2015s Drones, but songs like “The Globalist” – which features lyrical reflections of forgotten men like “There is no longer a country / To love and cherish one’s bond” – echo current political talking points several years before resuming the speech.

As with so many British rock bands that debuted in the late 90s, Radiohead’s influence weighs heavily on Muse’s discography. Their first two albums – 1999’s Show biz and the 2001 follow-up Origin of symmetry – possessed the quivering anguish of Thom Yorke & Co. Curvatures; to relay a brief anecdote, I remember walking past a headset screaming a pirated copy of Origin of symmetry on a marching band trip with the recommendation, “They sound like Radiohead.” Such an approach might seem old-fashioned in 2018, but by 1999 Muse was right on time – arriving at the precise moment which, as cemented by the sharp turn represented by the 2000 landmark. Child A, Radiohead was no longer too interested in being “Radiohead”.

Journalists and fans alike spent much of the early 2000s searching for a ‘new Radiohead’, appealing to everyone from Icelandic mystics Sigur Rós to sensitive British ballads Travis as potential candidates. But Muse emerged as the most successful of the lot commercially, ably evoking the guitar angst of Radiohead’s’ 90s work for an audience left cold by the latter’s icy electronic diversions. As Muse’s music grew denser, more proggier, and more melodically playful – encapsulating everything from arena rock to the skyscrapers and lyrical tendencies of Queen to the howl of EDM and the chimerical orchestral grandeur – they retained the dramatic dystopian tendencies of Radiohead towards OK Computer, especially since this last act was directed more explicitly towards sensual and painful thematic routes.

As Radiohead’s music has grown more obtuse and subtle over the past decade, Muse has grown into a competent pop group alongside his political provocations. Their 2006 album Black holes and revelations counted as their real breakthrough to a wider audience, aided by the soaring “Supermassive Black Hole” and U2 style; on 2012 The 2nd law (arguably their strongest record to date) they’ve delved deeper into electronic textures than ever before, collaborating with EDM group Nero and delivering a pleasantly sparse version of dubstep’s commercial aggression with “Madness.” .

More … than Drones, The 2nd law is perhaps Muse’s closest precursor to their eighth LP Simulation theory, which sees the release this week; after a string of self-produced records, the band locked themselves in the studio with backstage pop heavyweights like Timbaland, Shellback (Ariana Grande, Britney Spears), collaborator Dr. Dre Mike Elizondo and radio rocker Rich Costey. Despite the rock riffage that occasionally pops up on Simulation theory – the album’s most recent single, ‘Pressure’, swings with dirty guitars and handclaps much like Queens of the Stone Age – the record also finds Muse heading into synthetic territory and compatible with the streaming which assumed modern rock contemporaries Twenty One Plots have built a name out of.

“Propaganda” is built around a free-rhythm piece, an aggressive vocal sample of the song title serving as a sort of chorus; choppy tropical pop “Something Human” slides into wordless vocal sighs, while “Get Up and Fight” – the closest to the album comes close to recalling the early days of Muse’s anthem – toggles between a chorus tough and kind of tricky- A vocal sample with hip-hop overtones that made Imagine Dragons’ “Thunder” a staple on the radio. But more than the last musical direction taken by Muse, the thematic inclination of Simulation theory is perhaps the most fascinating aspect of the album.

Much of the album is positively coated with the kind of retro-obsessed nostalgia that has taken hold in popular culture; the video for “Something Human” focuses on a man trying to render a VHS tape before transforming into a werewolf, and the ’80s cover art was designed by Kyle Lambert, the British visual artist whose work you might recognize poster art for Strange things. In a Billboard interview, Bellamy cited childhood memories while watching Teen wolf and Back to the future while discussing the album’s emphasis on “virtual … and simulated reality”, before tackling an essential truism about culture in general: “We have passed the point where it is taboo to do anything. retro thing … there’s a kind of reaction where people tune in to what’s going on because it’s too confusing and too complicated to understand. So some people choose to go back to nostalgia, fantasy and dreamlike states to escape reality. “

It’s an oddly timed moment for Muse to voluntarily retreat into the comfort of nostalgia. Simulation theory is peppered with the sort of vague us-versus-them language typical of the Muse catalog, with discussions of falling blockages and group-as-poison thinking; Bellamy himself called the ideological strength of the single “Dig Down” to “[counteracting] the current negativity in the world ”. But there are few things that specifically reflect the anti-government pessimism that has characterized much of the group’s output over the past decade, at a time when said pessimism is very much in vogue on both sides of the political aisle.

It’s entirely possible that Muse’s recent correction in course is a direct result of the realization how similar their past rhetoric is to that of extremist groups that many see as endangering our way of life – but the issues that the band’s three previous albums have covered, from the deepening globalization of the energy crisis to the mundane carnage of perpetual warfare, have only grown in importance in modern life. (The first part of this presumptive trilogy was called Resistance – you don’t accidentally get more prescient than that.) After years of essentially predicting the mass cultural calamity we are currently mired in, Muse has abandoned his wobbly crystal ball on Simulation theory for the kitschy comfort of a Magic 8-Ball – possessing all the warm, fuzzy feelings of familiarity with longing, and none of the conviction of purpose.