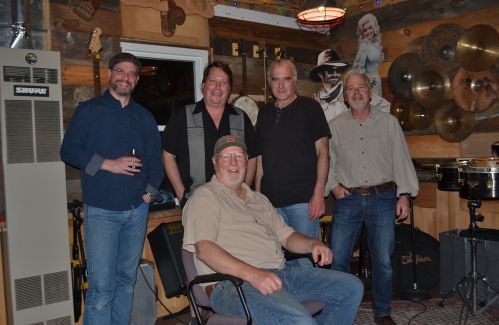 It’s Wednesday night and the music coming out of the Spillmore is initially low as you carefully navigate the bumpy dirt road beside Pool Pond in Rindge.

The tunes coming out of the cabin are familiar, but the song and lyrics in particular aren’t clear until the doors open to reveal the full extent of that night’s rehearsal, allowing for the rock sounds. classics to overwhelm you like an explosion from the past.

The Spillmore has long been the home of Sheepdip since its beginnings as a cabin band decades ago. The property is owned by the family of Dick Shelton, the only remaining original member of Sheepdip, for years, has been the perfect location for the band – and other musicians from across the region. Even when it burned to the ground in November 2013, the music community rallied to rebuild and things have been moving ever since.

Wednesdays are reserved for the five band members, who browse their extensive catalog of classic 70s tracks to prepare for their “Summer of ’21 Tour”.

The summer schedule includes two more shows at the Woodbound Inn (where they started their 2021 schedule last weekend), as well as five dates at the Phoenix Smokehouse at the Hometown Diner.

In addition to group practice, Fridays are another great night at Spillmore when others stop by to play, including the occasional appearance of a founding member.

“There aren’t a lot of people who haven’t come to sit on a Friday night,” said Ken Smith, who plays guitar and sings.

The basis of Sheepdip’s current training began about 15 years ago – and have they ever evolved. With over 100 shows to their name, from the Woodbound Inn and Phoenix Smokehouse in Rindge to the Toll Booth Tavern at the Crotched Mountain Golf Club in Francestown with stops at Harlow’s, Uplift Music Festival and many other local music establishments along the way. the way – Sheepdip has become a household name when it comes to covering the classical music genre.

It all started with the introduction of Shelton, Smith and Don Launder by Jim Connors. Ron Patterson entered the fray almost ten years ago and Glen Stegner completed Sheepdip’s current lineup after answering a call for a keyboardist in 2017.

“I saw the ad and said I had to check out these guys,” Stegner said.

On this special Wednesday night, Shelton (guitar, harp, percussion and vocals), Smith (guitar and vocals), Launder (bass), Patterson (drums) and Stegner (keyboards) are working on their reduced roster of about 40 to 50 songs. that the group has prepared for the coming season. That’s only about a third of their entire repertoire, but when you’ve been playing for a decade and a half, changing your set list is imperative.

“We have a pretty heavy library to draw from,” Smith said.

They have performed on tracks like “Shanty” by Jonathan Edwards, “You Can’t Always Get What You Want” by the Rolling Stones, “Listen to the Music” (Doobie Brothers), “Won’t Get Fooled Again” (The Who) and “Jet Airliner” (Steve Miller Band) just to see where it is.

“These are bands that you know, but don’t always hear,” Smith said. “And songs that not everyone plays.”

This is where the real work takes place, so when they take the stage the songs are like second nature and cover performances can occur organically. But only meeting once a week means taking time for themselves.

“My family makes it difficult for me to train for the practice,” Launder said.

Some songs are favorites, so they come back more frequently in the lineup, while others have a shelf life and only stay for a short time.

If people are standing and dancing, the idea is to keep the rhythm right and give them a reason to wiggle their hips. For quieter dinners, more plays and technical replays are queued. It all depends on the crowd and how it feels as the night unfolds.

“We’re trying to play more of the live version because we’re a live band,” Smith said.

There were a total of 10 public shows on the summer schedule, starting with last Saturday’s at the Woodbound Inn. Sheepdip will perform at the Phoenix Smokehouse (Hometown Diner) on Sunday, followed by two more shows at the Woodbound on the first weekend in June. While many musicians had to take time off last year, Sheepdip found a way to continue.

They performed for free, did a number of fundraising concerts, and made some extra money for paid concerts.

“We don’t do this as a livelihood; it’s more of a hobby, a love of music, ”said Smith.

Over the years, they have seen a number of bands come and go on the local music scene, as well as in venues.

As for the name and its origin: well, look no further than the label of a certain scotch whiskey. A long time ago, when the band was seated, playing tunes, sipping the adult libation, the name stayed true.

It all came together in the Spillmore which is filled with posters of Hendrix, The Beatles, Zeppelin and the Stones, instruments, a CD wall and a mirror ball. While the group is known for their shows in the area, the practice space is Sheepdip’s true home.

For more information, visit reverbnation.com/sheepdip or search for Sheepdip on Facebook.