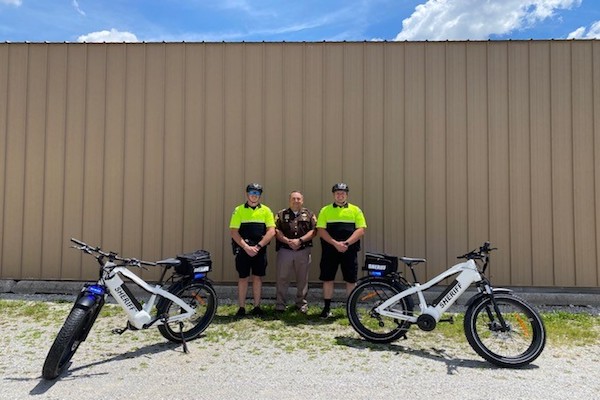 Kerley and Hansen will launch the new DeKalb County Mountain Bike Patrol. The primary duties of the Mountain Bike Patrols will be special details such as the Pickle Festival, ACD Festival, DeKalb County Fair, and other special events throughout the county. Their assignments will overlap with highway patrol, but their primary function will be the events to which they are assigned.

The following was issued by the Dekalb County Sheriff’s Office:

These bikes are electrically assisted. Fully equipped with emergency lights, sirens and first aid kits. They are very fast, very quiet and very agile. Officers in Patrol Vehicles are less exposed to interactions with the public where Mountain Bikes put you in front. Our goal is to maintain good relations with the communities and to build even more in the demarcated areas. The St. Joe River Greenway Trail was an area that was never patrolled in the past. As trails become a higher priority in DeKalb County and across the state, we need officers who can respond to these areas immediately. That’s exactly what the new Mountain Bike Patrol will do.