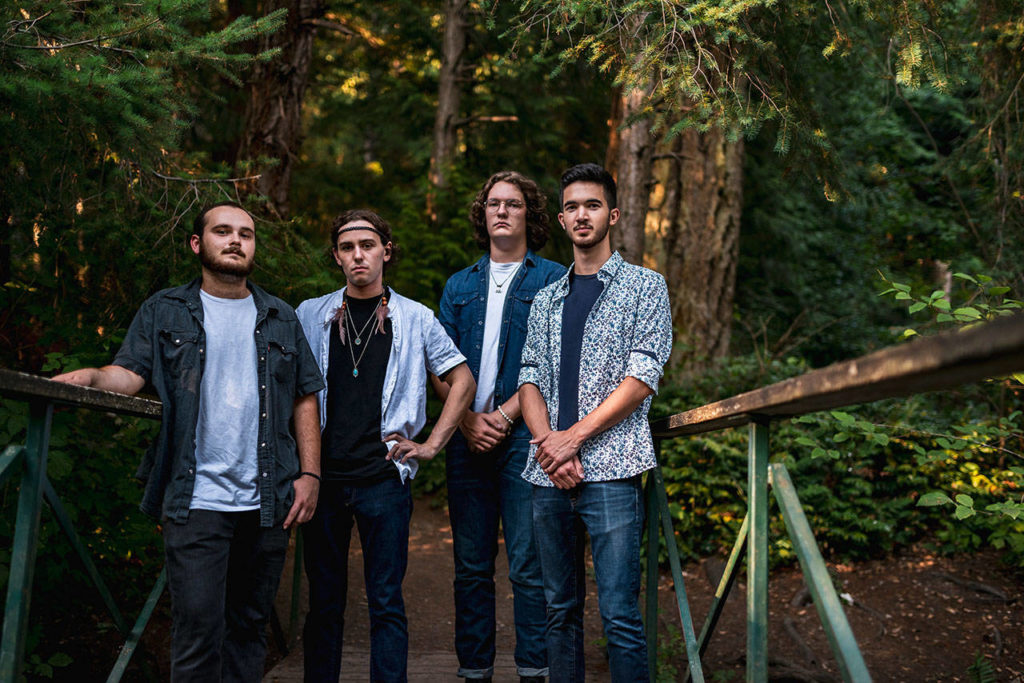 The scent of incense wafted through the dimly lit room where the four members of the Oakstones sat. Its source was uncertain – the North Delta warehouse space that the group uses as a studio has multiple rooms, all of which have a ’70s vibe.

Although he was born almost 30 years after the start of this decade, Bradley Lambert also had a 70s air about him. The 19-year-old, sitting on the group’s red leather sofa with the sleeves of his white t-shirt wrapped around his shoulders, spoke about the group’s future.

“I’d rather make $ 10 a day doing this and living in a piece of a van, rather than getting up every morning and listening to the man.”

The Oakstones are perhaps best described as a young band working to bring classic rock and roll back to modern playlists.

Made up of Sam Cummings (drums) and Lucas Davies (vocals and guitar), South Delta high school graduates, and Jacob Andresen (bass and vocals), the band focuses its sound on what they call a “flashback”. 70s rock.

“My background is just a singer-songwriter. Kind of like the acoustic guitar and the cold, ”Davies said, his crisp button-up plaid shirt punctuating his words. “So I basically put that down to aggressive 70s rock.”

His group mates laughed. They’ve worked the past two years to develop that sound, although when they started out in Davies’ garage they were less of a band than a jam session between high school friends Davies and Lambert.

“I was just looking for people to play music with me,” Lambert said, recalling how he and Davies started playing together. “He came over to my house and we wrote a song that night basically.”

“It was the coldest winter ever. It was like minus five, ”Lambert added. “Three heaters and the power kept going out because all that electricity was going to the garage.”

Eventually friend and drummer Nick Giffen started playing with the booming musicians, and with him came an Italian student and bass player. The band has fitted in well, but homestays don’t last forever and the Oakstones had to find a new bassist.

“That’s kind of where it points to where I joined the group,” Andresen said. Of the four current members of the group, Andresen is another who demonstrates a hint of the ’70s. The 18-year-old’s wavy locks paired well with his rounded bezels and a crystal hung around his neck.

Andresen had come to the Oakstones’ farewell concert for their bassist when Lambert approached him to play with the band. A few months later, Andresen was writing music for the group.

The latest change came in August 2018, when Giffen left the group to pursue football at SFU and Cummings joined the group with just two weeks before his first show.

But before that, in May 2018, The Oakstones released their self-titled debut album and saw their single “Dark Sunday” reach an impressive number of streams online.

Although they strongly favor a retro sound, the Oakstones are very modern in the way they bring their music to the public and how they measure success.

“We are almost at 300,000 [streams] total, just through Spotify, ”Lambert said. “We were lucky to have Internet users listening to our music. “

“Dark Sunday” is perhaps the Oakstones’ best-known song, with 160,000 streams on Spotify thanks to its selection for the service’s “Discover Weekly” playlist. The Reddit online forum also played an important role for the group.

“This is where the [“Dark Sunday”] boom came, “Andresen said,” when we posted on a subreddit. It also got a lot of attention on YouTube.

The group said they regularly have around 15,000 people listening to their music. Even though this is only a small proportion of the global online audience, “15,000 people is better than nothing,” said Andresen. “Maybe it’s 0.0002 [per cent] of the world’s population, but it still means a lot to us.

In early 2019, The Oakstones will release their second album. This is the one they’ve been waiting for, the one they think will showcase their more mature sound.

“It defines us a little bit more, the sound that will be on the EP,” Lambert said.

The group will also continue to perform live, with their first show of 2019 at Vancouver’s Red Room (398 Richards St.) on February 2. The four musicians hope their budding careers will only progress from there.

“I plan to keep doing this until I go crazy or retire as a musician,” Lambert said. “Because I don’t see any other way to live life. This is what I want to do.