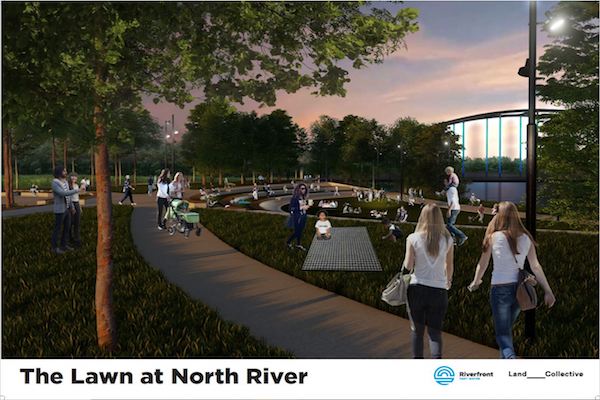 Phase II of Riverfront Public Space will continue Fort Wayne’s proactive efforts to revitalize its central waterfront by extending public space from Promenade Park along the St. Marys River west to Ewing Street and east to Clinton Street. The expanded public space will include an extension of the elevated Tree Canopy Trail, private boat docks, a universally accessible bouldering mound, a grove of hammocks, walking paths and landscaping.

The City released the following:

One of the main goals of this next phase is to continue to create public and gathering spaces for local residents and to become a regional destination for visitors, tourists, developers and businesses. The goal is to create a vibrant mixed-use neighborhood with diverse housing and employment opportunities, and to connect existing hubs and neighborhoods to each other and to the riverfront.

The opening of Promenade Park in 2019 was Phase I of the waterfront development. Promenade Park has quickly become one of the most popular destinations for residents and tourists. In addition to being a nationally recognized park, Promenade Park has reinforced the city’s proven track record of leveraging public funds to catalyze private investment.

Shortly after the opening of Promenade Park, Indianapolis-based developer Barrett & Stokely, Inc. opened The Riverfront at Promenade Park, an $88.7 million mixed-use residential/office building, located in front of the park. Construction of The Lofts at Headwaters Park, a $67.5 million mixed-use apartment building near Headwaters Park, will begin soon. Barrett & Stokely is investing in the two projects which are the latest additions to the more than $1.2 billion that has been invested in the city center over the past decade.

Barrett & Stokely also plans to build a mixed-use project that would settle on the 2.28-acre site known as “The Wedge”. The site is located northwest of Promenade Park on the north side of the St. Marys River and is connected to the park by the historic Wells Street Bridge.

Additionally, the city recently acquired the PepsiCo facility which sits on 6.4 acres, located at 1207 N. Harrison St. The vision for the property is to use it to attract new private investment that will bring additional revenue. to the city, providing a more compatible environment. use to adjacent neighborhoods and additional investment in public waterfront spaces.

“Investing in our waterfront continues to be a top priority as we work together to make a lasting and meaningful difference for individuals, families and businesses in Fort Wayne,” said Mayor Henry. “Having an excellent quality of life in our community is essential, and I continue to be encouraged by the public interest and support in making our riverfront a world-class destination point. We are succeeding and the next steps in this process are promising and will provide unique opportunities for more public and private projects that will be beneficial for many years to come.

The next stage of Phase II of the construction of the waterfront public space involves the approval of a bond to finance the work. The project will be funded by a $32 million rental income bond. This bond will be repaid using the existing revenue stream provided by the Local Economic Development (LIT) Income Tax and will not result in any increase in local taxes. This funding mechanism was approved in 2017 by City Council.

The bond approval process will go to the Redevelopment Authority, Redevelopment Commission and City Council for consideration this month.

Construction of Phase II of the waterfront public space is expected to begin before the end of this year and be completed by the end of 2024.