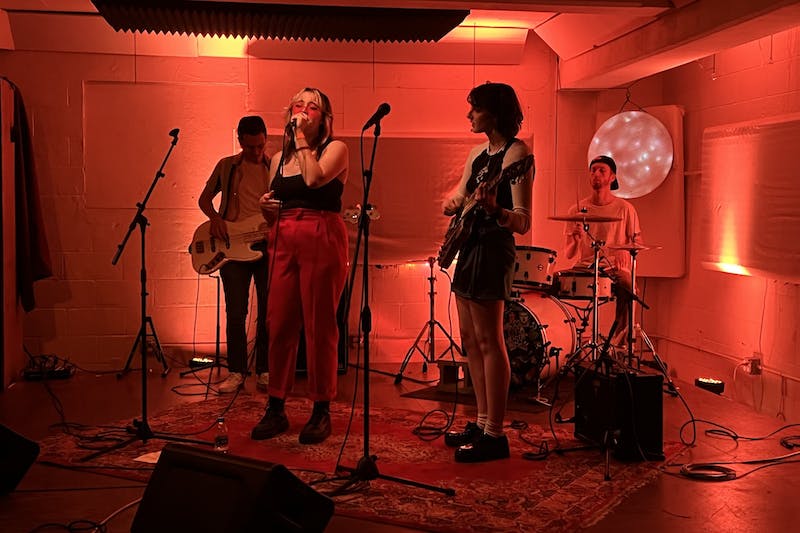 Rock bands took the stage at Blockhouse Bar on April 14

Rock bands SYZYGY, ForeDaze and Reality Something performed at Blockhouse Bar on April 14.

The bar was full of fast-paced scratching and drumming with a supportive community as SYZYGY kicked off the night.

Lead vocalist Lu Harper started the band in August 2021, but the full band officially formed about a week ago when they met drummer Cory Schmitt through Music Industry Creatives on campus.

“I’ve wanted to be in a band since I was 5,” Harper said. “I’m finally in a place where there are a lot of people and I can probably find people who want to be in a band too.”

Harper voiced a Destroy Boys member as they covered “I Threw Glass at My Friends’ Eyes and Now I’m on Probation” from the band’s “Sorry, Mom” ​​album.

Bassist Caden Hamscher bounced with the beat as the band played an unreleased original, “Pissing and Shitting,” and none of the members held back.

Hamscher said it’s fun to create art and know that you’re the one having a good time.

SYZYGY also performed covers of “I Love You So” by The Walters and “Take Me Away” by Christina Vidal, also featured in the movie “Freaky Friday.” The band also played their latest single, “Cake Emoji,” a song Harper wrote about her ex sending her a cake emoji on her birthday.

“I like to use it as an outlet and take complicated emotions that I don’t know what to do with and turn them into a song that I can have fun with,” Harper said.

ForeDaze, an alternative indie band, played mostly original songs and a few covers with three guitarists and a drummer for the second time at Blockhouse Bar.

ForeDaze drummer Carsen Outwater, who mixes the band’s music, said that of the three bars they performed at, the atmosphere at Blockhouse Bar was the best. Everyone in the band agreed that the vibe at Blockhouse Bar is second to none.

ForeDaze said they could release an EP by the end of the summer. In addition to their original songs, ForeDaze have covered bands like Radiohead and Nirvana. Marty Abaddi, lead vocalist and rhythm guitarist, put down his guitar to perform Nirvana’s “Breed.”

After two years without touring due to COVID-19, Reality Something, a rock band from Nashville, Tennessee, has decided to book weekend gigs.

The band shook the stage as each member moved and Reality Something vocalist and guitarist Elena Franklin stood on her tiptoes as she sang into the microphone.