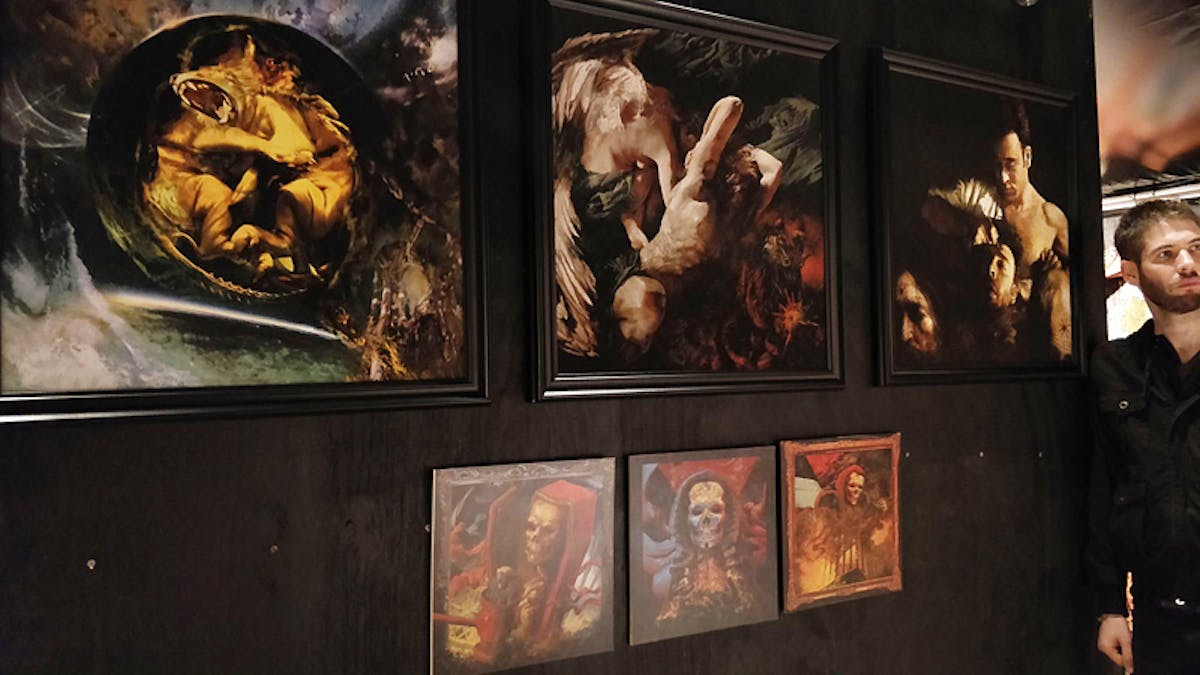 The man behind modern rock and metal’s most knotty work – Kerrang!

Eliran Kantor is a Berlin-based artist whose work has graced more than 175 album covers including Testament, Soulfly and Venom Prison.

In the coming weeks, his latest work will appear on Andy Black.‘s The Ghost Of Ohio and The Wildhearts’ Renaissance Men, with many more scheduled in the upcoming 12 month.

His style has a classic touch and his subject will disturb you. Of course, we wanted to know more …

“I started drawing as a child. My father, Zeev Kantor, painted and drew, so his work was my introduction to art when I was a toddler. He painted the walls in my room with Disney characters and his own walls with characters from The Wall by Pink Floyd. The following years were mainly in pen and pencil, with some occasional experiments with chalk and acrylic. I did cartoons and drew screenshots of an imaginary Teenage Mutant Ninja Turtles video game that didn’t exist. TO 15, I did some murals on my bedroom walls in acrylic, then I was asked to paint the walls of a few friends as well. A few local metal bands saw them and asked me to design album covers for them.

Do you have formal artistic training?

“I am mainly self-taught. I took a junior art class every two weeks around age 12 for one year. It covered the very basics of perspective, composition and manipulation of various mediums. You had to enroll in two different courses, so I took animation too, but I wasn’t too keen on drawing the same thing 24 times per second, so I did claymation instead. Visual art has always been something I did since I was a kid, while music was something I really wanted to read, learn, and obsess over, but never create – other than a few demos in my bedroom as a teenager. .

Which metal bands did you grow up listening to?

After stepping into metal, we understand that you picked the Iron Maiden, Megadeth, and Metallica albums purely by their album art. What were these albums and what attracted you to them in art?

“It was actually my introduction to metal, because I got into Deep Purple because of my dad, and inside the album there was this catalog, and I saw a few names there that I didn’t care about. remembered Beavis & Head of knots. These are the three bands you mentioned, and I just bought Killers, Master Of Puppets, and Youthanasia, all of which are cover based. Each was so iconic; the characters, the composition, the color palette… I can’t say exactly what caught me, and that’s part of the magic. If you could say exactly what a song or painting needs to contain to get you excited, that would be easy to replicate. But there is something amazing about this unexplained connection.

Do you remember the cover of the first album that caught your eye?

“The first was Gerald Scarfe’s interior gatefold to Pink Floyd’s album The Wall, and the animations he did on the film. And the second would be the cover of Mark Ryden for Dangerous by Michael Jackson. Both were so unique and memorable despite being so detailed or chaotic.

Which modern artists inspire you?

“If we include the ‘70sand ‘80s, my favorite would be [Zdzisław] Beksiński, and the 2000Since then, I really like the work of Jesse Kanda: really original and visionary. I am in fact the work of many young people 3D animators who are part of a very exciting wave or a grotesque surrealism that looks very futuristic. Animators have always been a huge inspiration to me, with John K’s animation of Ren and Stimpy and Terry Gilliam for Monty Python being my two favorites.

Which classical artists have influenced your style?

“I have never been the most versed person in the history of art and I could talk to you about music ten times more, but I have absorbed a lot over the years and it stuck with me because of my strong visual memory. You can show me a cut of a person’s knee from a Rubens painting, or an eye from a Caravaggio piece, and I would probably know which piece it is, but I can’t really tell you how big it is. – something about the stories behind these pieces or the biographies of the artists. Besides the aforementioned two, the shortlist would likely also include Goya, Menzel, Böcklin, John Martin, Repin and Bouguereau.

You started out making art for local bands. How did you feel when you saw the finished product?

“The timeline is a bit hazy there, it was either Solitary or Armilos, whose line-up included future Orphaned Land members Matan and Idan. Like a 17-years old and a huge CD collector at the time, I was so thrilled when I got these CDs. I have a really vivid image of those moments in my mind. I had the two outside of a local gig and probably stayed outside to check out every panel and part of them, I probably missed a few of the first acts.

What was your first ‘big commission?

“The first time I worked with a band whose name I’ve heard before was Aghora, on their album Formless, and the first time I worked with a band that I was a big fan of and of which I had a lot of records, it was Mekong Delta on Lurking Peur. But Testament’s The Formation Of Damnation was probably the first one you could call ‘fat’. All of my friends and I have loved them for years, and it was a much anticipated comeback. I was in contact with Maria ‘Metal Maria ‘Ferrero who led them, and she deserved all the credit for the idea of ​​pairing me up with Testament.

How is the process going? Do the bands let you do your own thing or is it a collaborative effort?

“It varies. Sometimes a band that has given you carte blanche in the past can have a very specific vision for the new album, which is fine if it’s strong, as the main concern is to create something great together, it doesn’t matter who proposed it. the idea. But with most of my work, I usually get the title and lyrics, and come up with the concept on my own.

Does being a metal fan allow you to better understand the requirements of a band?

“Having common points naturally facilitates any collaboration, at least on the communication part. Because long before you start drawing, you talk about concepts over email or over the phone, trying to describe something visual. But the main thing is that I work closely with the music: I listen to previous records, new demos or raw mixes, and because I understand what bands are supposed to sonically accomplish, and probably share similar influences with the band, I have a good idea of ​​the colors, the movements, the characters and the story that would go best with the music.

Is it useful to listen to the album while you work?

“I only listen to it before. While painting I do not listen to anything because I am an extreme monotask. A record might repeat itself three times before I notice it. “

How long does a part take on average?

“It varies, extremely. Some, but not many, took a blank week to paint, while others took over a month. “

Andy Black, the ghost of Ohio

You did the covers for Andy Black’s new album and the Wildhearts’ Renaissance Men. How did they come about?

“Their managers just emailed me. Both were fantastic to work with. I was suddenly doing two back to back portraits, whereas I have only done one portrait in the past. Ten years ago I was commissioned by the late Dave Brockie to paint GWAR, which ended up in the Lust In Space booklet and stage banner, and also sold as a poster on the tour.

“At the moment my current favorite is Loudblast III Decades of live ceremony, but any current favorite still has to fight Sigh’s In Sompniphobia. I think the reason I like both the best is that both concepts are quite original, and in both the storytelling worked well and I’m at peace with how what I was looking for was achieved.

What’s your favorite album cover of all time?

“I always measure the impact of anything new I see versus that of Iron Maiden‘s Killers. It’s so simple yet so effective, and that yellow street light gives it such a subtle familiarity that takes you right into that scene. During my teenage years, I painted this one on my bedroom wall in acrylics.

What does next year have in store for you?

“Many new albums are in preparation: Testament, Atheist, Incantation, Thy Art Is Murder and others. There’s a Devin Townsend record that we’ve been slowly making in the background for a few years now, hopefully we’ll pick it up again this year. It’s an epic symphony on penises. Other than that, there are a couple of metal festival show offers, and I loved doing the ones I’ve had recently at Bloodstock and Copenhell, so I’m looking forward to that. Especially after the response the two received, seeing how many festival goers and music fans find it special and exciting, as they never see their favorite album covers this big and up close.